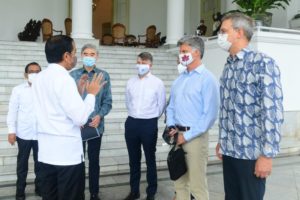 Before leaving, the President held a conversation with the ambassadors on the terrace of the Bogor Presidential Palace. Then they left the Palace using a series of vehicles at around 08.00 Western Indonesian Time.

After performing Friday prayers at the At-Taqwa Mosque in Ministry of Environment and Forestry Training Center Complex, the President is slated to return to the Bogor Palace. (BPMI/UN) (FI/MMB)