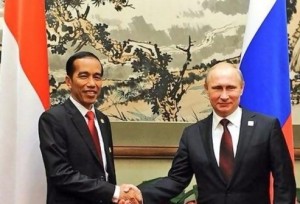 In addition to visiting South Korea on 15  18 Mei, President Joko Jokowi Widodo  is slated to visit Russia on 18-20 May to attend ASEAN-Russia Summit to commemorate 20th Anniversary of ASEAN-Russia Cooperation. The Summit is to be held in Sochi, Russia, on 19-20 Mei 2016.

He added that this is the first President Jokowis visit to Russia, which is Indonesias important trading partner. Previously, the last Indonesian President who visited Russia was Susilo Bambang Yudhoyono back in 2006.

During the talk, Witjaksono added, President Jokowi and his Russian counterpart will discuss bilateral, regional, and global issues.

For bilateral issues, both leaders will discuss economic issues, one of which is the effort to expand market access for Indonesias primary products, he added.

In addition, Witjaksono said that both leaders will discuss measures to increase Russias investment in Indonesia, especially in the infrastructure and energy sectors and cooperation on defense and security sectors between the two countries.

One of the results to be produced is cooperation on defense sector. Both countries will also establish a joint communiqué on measures to address illegal, unregulated, and unreported (IUU) fishing and sign a Memorandum of Understanding on archives, Witjaksono said.

Witjaksono further said that ASEAN and Russia began an informal dialog in 1991 and in 1996 both sides upgraded it into a formal ASEAN-Russia partnership cooperation. (ANT/ES) (Naster/YM/EP)