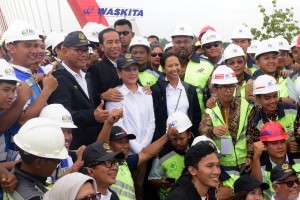 Trans Java Toll Roads network is expected to boost the countrys economy and benefit all people, according to President Joko Jokowi Widodo.

On that occasion, President Jokowi and First Lady Ibu Iriana Joko Widodo traveled by bus from Surabaya to Semarang along the toll roads, covering 349 kilometers. According to the President, the toll roads are ready to operate and the quality of the roads are excellent. He also called on anyone who wants to use the toll roads to drive safe. (RAH/OJI/ES)