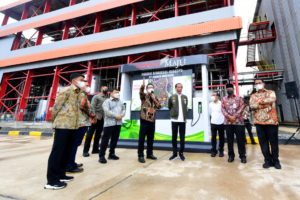 Measures to develop downstreaming and industrializing of palm oil sector must be taken in Indonesia given its enormous potentials, President Joko “Jokowi” Widodo has said.

According to the President, the potentials of the country’s crude palm oil (CPO) reach 52 million tons per year so the Government must make the most of it.

“We must carry out downstreaming and industrialization. The Government must force its implementation,” said President Jokowi when inaugurating the biodiesel factory owned by PT Jhonlin Agro Raya in Tanah Bumbu regency, South Kalimantan province, Thursday (21/10).

The President also explained that strengthening biodiesel industry is a very strategic choice in the future in a bid to increase national energy security and narrow down the large trade balance deficit due to diesel imports.

“If we are able to produce our own biodiesel as a mixture material to produce diesel, our imports will drop drastically. In 2020, we saved Rp38 trillion in foreign exchange and in 2021 it is estimated that we can save foreign exchange amounting to up to Rp56 trillion,” said the President.

The Head of State also underscored that the construction of the biodiesel plant will create many jobs, maintain stability of CPO prices, and help improve environmental quality by reducing greenhouse gas emissions.

The President also reminded the importance of upholding the commitment to leave fossil energy and switch to new and renewable energy and encouraged biodiesel production to continue to be increased.

“In 2021, our target is to produce and distribute 9.2 million kiloliters of biodiesel and the figure will increase next year,” he said.

President Jokowi also expressed appreciation to PT Jhonlin Group which has built a biodiesel factory and supported industrializing CPO to biodiesel so that it can provide greater added values and create derivative products from CPO.

“We also hope that in the future there will be other companies that will start downstreaming and industrializing their CPO into cooking oil, cosmetics, semi-finished goods or other finished goods,” he said. (BPMI/UN) (EST/EP)