President Jokowi: Unity and Brotherhood are Gods Gifts to Indonesia 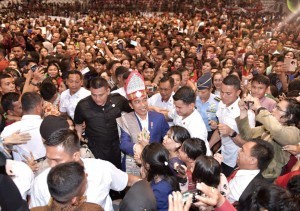 Brotherhood, love and unity are Gods gifts to Indonesia, and the diversity should be seen as a source of power, according to President Joko Jokowi Widodo.

The President made the statement in his remarks during the 2018 National Christmas Celebration in Deli Serdang, North Sumatra, Saturday (29/12).

“The nation’s greatest assets are unity, harmony and brotherhood. The unity that comes from our nations diversity is our strength, which is not easily defeated by anyone because we have a strong unity,” President Jokowi said.

On that occasion, the President also called on the nation to be grateful for God’s grace – diversity and unity – by maintaining mutual respect, help, and love.

“I wish you a merry Christmas and a happy new year.  May peace and prosperity always be with our country, Indonesia,” the President concluded. (BPMI/EN)