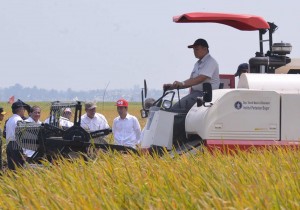 President Joko Jokowi Widodo on Sunday (27/9) visited a rice field in Karawang, West Java, to see the harvest of a new variety of rice, 3S.

On that occasion, the President expressed his optimism that rice needs in the country would be fulfilled particularly after the rice variety, found by the Bogor Institute of Agricultural (IPB) is able to produce 13.4 tons of rice per hectare.

The improvement is very significant. We need this kind of intensification to make rice production increase significantly, President Jokowi said, adding that the variety had been tested in 500 hectares area and would be planted in 100 thousand hectares area.

According to the President, during almost one year of his administration, national rice need can be fulfilled by farmers without import albeit many calls to import the rice. However, he asserted that rice stock, which amounts to 1.7 million tons, is still in the safe limit.

Even though as much as 220 thousand tons of rice stocks must be allocated for affordable rice for underprivileged (raskin) every month, the President remained optimistic that rice stock is still sufficient.

The important thing is that rice supply is enough, distribution is good and the price is affordable, he noted.

To keep the price of rice affordable, President Jokowi as cited by Presidential Communication Team Ari Dwipayana in his press release on Monday (27/9) said that the Government would conduct market operations.

In the meantime, regarding the impact of the prolonged drought in Indonesia this year, President Jokowi considered that as a big challenge.

We are still calculating. We need a sufficient rice stock because the El Nino will still happen until December-January, he noted.

According to the President, in the future, the countrys major challenge is to give an incentive to farmers so that they are passionate to cultivate their lands.

All of them work and the production will increase, he said.

The President also hopes that in the future, the State Logistics Agency (Bulog) would be able to maintain the price of rice to avoid speculators to take benefit from it.

Research and Development (R&D) must be performed continually. IPB has performed many researches and we can now see the result, the President said.

Accompanying the President during the visit were Minister of State Secretary Pratikno, Minister of Villages, Underdeveloped Regions and Transmigration Marwan Jafar, and Head of Presidential Staff TetenMasduki. (SLN/UN/ES) (JS/EP/YM/Naster)/Sy.