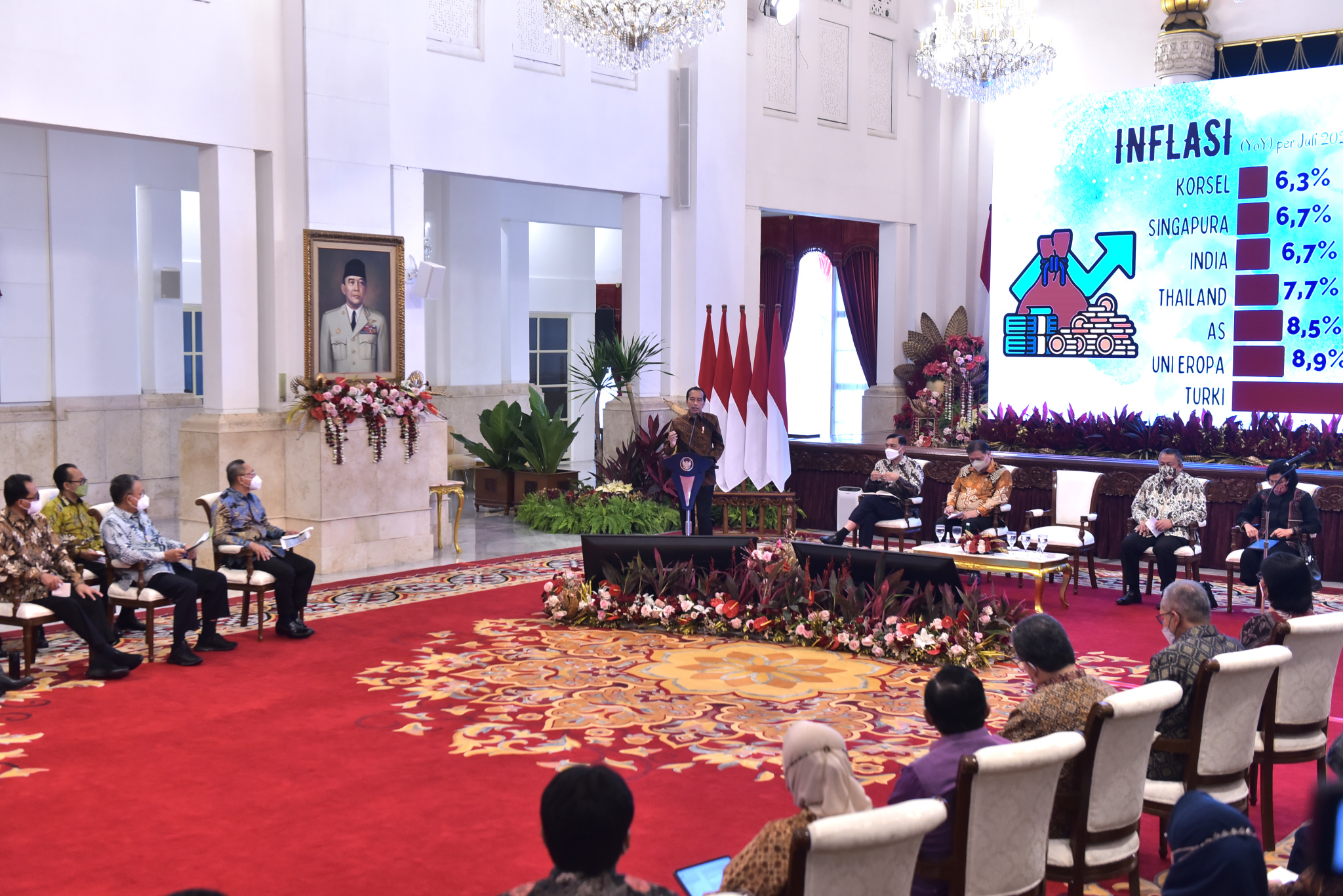 President Jokowi has urged his administration to work together to control inflation in the country.

According to the President, commodities can be supplied from other regions that have abundant supplies to curb commodity price increase that causes inflation in a region.

The President also urges that contingency budgets be used to cover transportation costs that often hinder interregional commodity shipments and eventually to overcome inflation in the regions.

The President went on to underline the vital role of regional governments in monitoring inflation in their respective regions.

“Please check thoroughly what caused it, so we can overcome it together and it can drop to below 5 [percent]. It would be great if it can fall to below 3 [percent],” he said.

“The prices of Pertalite, Pertamax, and Solar fuels, LPG, and electricity are not the actual prices, not the economic prices. Those are prices that are subsidized by the Government and the subsidies this year amounted to Rp502 trillion,” he said.

The President closed his remarks by urging his administration to not conduct business as usual as the current situation is not normal and to work together in both micro and macro scales.

“I am certain that effective cooperation between provincial, regency, and city governments, governors, regents, mayors, TPID, and TPIP can reduce inflation to below 3 [percent] because we have the commodities,” he remarked.

Previously, Governor of central bank Bank Indonesia Perry Warjiyo reported that the inflation as of July 2022 is 4.94 percent.

“It is still lower than that of other countries, but it exceeds the determined upper threshold of 3 percent plus minus 1 percent,” he said while pointing out that the inflation is primarily caused by the drastic food price increase that reached 11.47 percent, which is supposed to be at a maximum of 6 percent.

“The main factor is the increase in global commodity prices due to the continuation of geopolitical tension in several countries, which disturb the global supply chain and lead several countries to implement policies on food export restrictions,” he said.

Perry further said that domestic supply chain disruptions occur at a number of horticultural production centers, including chili and shallot production centers due to structural issues in the agricultural sector, weather issues, and food availability.

Global energy price surges, Perry added, have also given rise to the inflation of administered prices, including in the aviation sector.

“Inflation rate can be curbed in line with the government policies to increase energy subsidies. Meanwhile, inflation on the demand slide or often called core inflation remains low. It demonstrates that the people’s purchasing power has not fully recovered yet although it has improved, whereas inflation expectation can be maintained,” he remarked. (FID/UN) (DH/MMB)