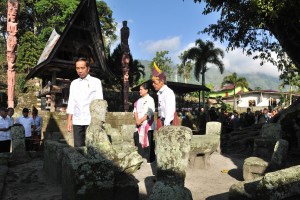 For the record, President Jokowi who is accompanied by First Lady Ibu Iriana Joko Widodo visited Huta Siallagan Village where Batu Parsidangan, meaning “Stones for Meetings and Trials”, is located and Onan Baru traditional market Pangururan where commodities from all regencies in North Sumatra are being sold. In addition to these locations, the President also inspected the sites of the expansion of Tano Ponggol canal and the development of Tano Ponggol bridge.

“I have also inspected the roads around Samosir Island. The construction of the roads is almost completed and the remaining 21 kilometers is expected to be finished this year,” the President said.

He went on to say that traditional customary villages, and Ulos Village, a village that produces traditional woven fabric ulos, will be rehabilitated. In addition, local markets will also be developed this year.

“Hopefully, all works can be completed, including the development of docks and seaports. Therefore, we can promote Lake Toba widely to the public,” the Head of State said.