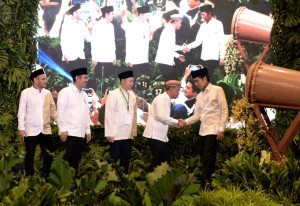 During the past five years, the Indonesian Government has been developing infrastructure throughout the country aimed at connecting all regions and areas in Indonesia.

It is a task for entrepreneurs to support development facilitated by the Government and create economic centers that play vital a role in Indonesias economy, President Jokowi said in a National Gathering of Indonesian Young Entrepreneurs Association (HIPMI) and an iftar dinner (communal fast-breaking) with a number of orphans, at Ritz Carlton Hotel Jakarta, Sunday (26/5).

According to the President, based on his working visits from Sabang to Merauke, he noticed that connectivity remains a major issue in almost all regions throughout the country and for that reason, public facilities including roads, toll roads, airports, and seaport had been developed massively.

This is what we have done during the past five years, namely developing infrastructure so that cities, regencies, and provinces are connected, he added.

The Government, he added, also undertakes bureaucratic reforms projected to make permitting process easier. President Jokowi added that institutional simplification must be made to minimize overlapping so that bureaucratic tasks will be more efficient and faster.

After carrying out the first stage of national development through infrastructure distribution, the Government will focus on human resources development for the next five years, he added.

The Head of State also said that he realized that results of human resources development cannot be enjoyed instantly, but it must still be carried out so that Indonesia can advance into a developed country.

It is very important for our economic foundation. If we do not develop our human resources, the country will fall into middle-income trap. There are many countries trapped in the middle-income trap and they cannot advance and become a developed country, the President added.

Therefore, President Jokowi expressed hope that members of HIPMI and other associations can collaborate with the Government in improving the quality of Indonesias human resources and hiring them. The Government has also prepared trainings and scholarships to increase the national human resource capacity, he added.

Link and match between industry and education sector must be established. I hope HIPMI will offer cooperation with related ministries, as well as with central and regional governments to improve human resources that will start bringing benefits for the country in the next five years, the President concluded. (BPMI Setpres/ES)