President Jokowi Urges Govt Apparatus to Reaching Out to People 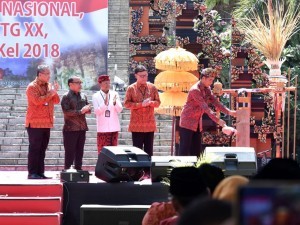 President Jokowi made the statement in his remarks when opened the 20th National Work Meeting on Appropriate Technology (TTG) and the 2018 Innovation Week of Village and Sub-District Development (PINDesKel), Friday (19/10).

The same thing also applies to governance management. We need to see it from bigger picture (zoom out) and also in details (zoom in). It is important to listen to the reports from ministers in a cabinet meeting, and also has to pay working visits to see the real condition on the ground, the President said.

Rather than knowing if some policies have been issued or not, the most important thing for me is knowing that the people really receive benefits from that policies, the President firmly said.

Also on that occasion, President Jokowi appreciated all kinds of dedication that the government apparatus have devoted to the nation and state. However, the President stated that he must not be carried away by all these achievements, and hopes that the apparatus will continue improving their programs.

I want all national programs to be monitored whether they have reached all layers of society or not, whether the right people have received benefits from Healthy Indonesia Card (KIS), Smart Indonesia Card (KIP), and Aspiring Family Program (PKH) or not. If the programs are not right on target, we must fix it, the President concluded.