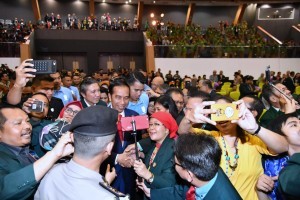 The Government is trying to find the best solution to overcome the budget deficit issue in the Social Security Provider Body ( BPJS) for the Health. The first step is to allocate a budget of Rp4.9 trillion to cover the deficit.

We will then look for funding options that can be used to cover the bill, President Joko Jokowi Widodo said after opening the 30th Indonesian Doctors Association Congress (IDI) at Samarinda, East Kalimantan Province, Thursday (25 / 10).

The President said he considers a number of options, such as efficiency in the BPJS itself, including improving its management. In addition, according to the President, the BPJS also should intensify the collection of insurance bill that are currently less optimal.

Particularly collection for the Governments assistance recipients which should be intensified, said President Jokowi.

For example, patient from Asmat Regency can be diagnosed by a doctor in Halmahera, North Maluku Province, then the doctor asks help from his fellows in Jakarta. Something like that, said the President.

Regarding hospital issue, President Jokowi proposed an idea about smart hospital, where medical data of patients can be integrated with other hospitals, pharmacies, and the BPJS.

If we are not following the latest technology, we will be left behind, the President reminded.