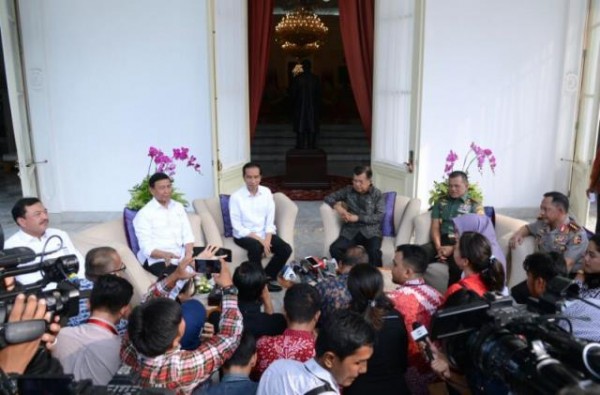 In a press statement at the end of the meeting, President Jokowi urged all Jakartans to exercise their political rights without any hesitation. President ensured the security aspect in Jakarta during regional election. “The right to vote is guaranteed by the Constitution to choose the Governor and Deputy Governor. I invite all citizens who have the rights to vote, to exercise their rights without any hesitation,” the President said.

President Jokowi asked people not to worry about the situation in the capital during the gubernatorial election.

According to the President, he had instructed all state officials, the TNI, and Polri to ensure the smooth implementation and security of the election for Governor and Vice Governor of Jakarta. “All citizens must be able to exercise their rights without interference and without any intimidation from any parties,” the President said.

Regarding the outcome of the Jakarta gubernatorial election, President Jokowi believes the Governor-elect is the best choice for people in Jakarta. “I am confident, in shaa Allah, later on the democratic process in Jakarta will run smoothly, transparent, orderly, and have leaders who are truly the choice of Jakartans, and the best for Jakarta,” the President concluded. (UN/ES) (MUR/YM/Naster).