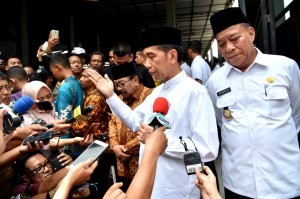 President Joko Jokowi Widodo said he respected the ruling made by the Supreme Court (MK) on Baiq Nuril Maqmuns case and encouraged her to submit a case review to MK to seek justice.

Nuril is a teacher from West Nusa Tenggara province who was convicted of defaming her alleged sexual harasser.

If the case review does not provide justice, then she can apply for clemency to the President. Once she has applied for clemency, thats where intervene. This is the procedure, he added.

The Supreme Court has sentenced Nuril to six months imprisonment and ordered her to pay a fine of Rp 500 million (US$34,218) after finding her guilty of defaming the principal of the public high school where she worked. She was found guilty of violating Article 27 Paragraph 1 on the Electronic Information and Transactions (ITE) Law.

The 37-year-old mother of three was accused of circulating a recording of a phone call in which the principal related the sordid details of an affair he had with another woman.  Nuril claimed she had only taped the phone call and that the recording was distributed by someone else.  (BPMI / EN)