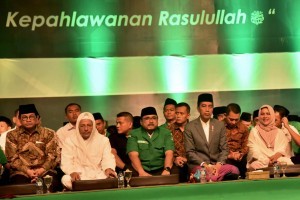 As  Muslims, the President continued, we ought to follow the Prophets example, such as have good morals in order to carrying out the mission of rahmatan lil alamin (blessing for the whole universe), and maintaining ukhuwah (brotherhood) among the citizens. Ukhuwah which does not discriminate of religious backgrounds, social status, political views, as the Prophet did when lead Medina, he said.

In addition, President Jokowi also reminded the audience to continue to guard the Unitary State of the Republic of Indonesia (NKRI). He also invites people to hijrah (transition) from selfish attitudes to caring for others.

Hijrah from vengeful to compassionate, from short tempered to full of patience, from favoring commotion to favoring peace, he added.

On the occasion, the President expressed his pleasure to be in the midst of the GP Ansor the youth wing of Nahdlatul Ulamafamily because the GP Ansor is always in the forefront in safeguarding the Pancasila and 1945 Constitution, maintaining unity in diversity, and protecting the country from separatism and terrorism .

At the end of his speech, President Jokowi advised the GP Ansor members to always be patient in facing every challenge and put the interests of the country above all else, to continue to maintain the spirit of scholars and organizations, and to promote Islam and Indonesia.

Let us go forward to bring social justice to all the people of Indonesia, to improve the quality of Indonesia’s human capital, to make Indonesia a prosperous nation full of God’s blessings (baldatun toyyibatun wa rabbun ghafur), the President concluded.