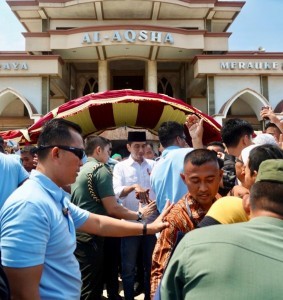 After performing Friday Prayer at the Al-Aqsa Mosque in Merauke Regency, Papua Province, on Friday (16/11), President Joko Jokowi Widodo reminded all elements of society to continue to maintain the unity of Indonesia.

On this good occasion, I urge the people to maintain our brotherhood, our ukhuwah islamiah (Islamic brotherhood), our ukhuwah wathaniyah (brotherhood of the nation), because our nation’s greatest assets are unity and harmony, nothing else, the President said.

President Jokowi also express his hopes that a routinely held fiesta of democracy whether it regional election or presidential elections must not torn the national unity apart. According to the President, differences in political choice are common. If we fighting among ourselves, that is a big mistake, he said.