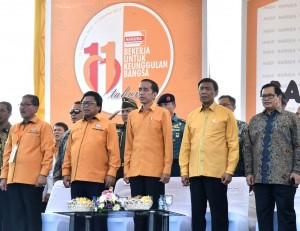 Ahead of political years that will see simultaneous regional head elections, Legislative Election as well as Presidential Election, all political parties in the country are expected to stay solid and harmonious, according to President Joko Jokowi Widodo.

The President made the statement in his remarks at the peak event to commemorate 11th Anniversary of the Hanura (Peoples Conscience) Party at Pantai Marina, Semarang, Central Java, Saturday (23/12).

Leaders within political parties must be a role model for the people, give political education for the people, and the parties orientation must also be clear in safeguarding the Unitary State of the Republic of Indonesia (NKRI), to strengthen Pancasila (the Five Principles, the Indonesian state ideology), and to strengthen the countrys motto Bhinneka Tunggal Ika (unity in diversity), the President said.

Besides, the President said, the world is increasingly globalized and flow of information is moving rapidly yet, hoaxes are getting rampant.

On that occasion, President Jokowi also called on Hanura Partys cadres to always stay vigilant in defending the interests of the state and the nation. The partys cadres are also expected to take part in developing gracious politics with characters and pure hearts, to stay away from slanders and insults, to do things based on the peoples conscience and to improve the peoples welfare.

President Jokowi also called on the cadres to make the Party a modern, professional party that is loved by the public.

I invite the Hanura Party to always be in synergy with the Government in effort to bring prosperity for the people, to alleviate poverty, and to narrow down the gap, the President said.