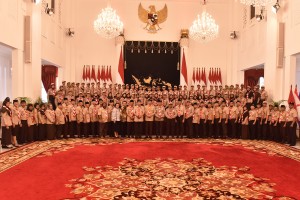 President Jokowi takes a picture with the Indonesian Scout Movement Contingent that will participate in the World Scout Jamboree, at the State Palace, Jakarta, Friday (19/7). (Photo by: Rahmat/PR)

On the occasion, the President expressed his hopes that the participants will show a positive image by being friendly, polite, and helpful to others.

“Learn to cooperate with scout members of other countries to increase your self-capacity for the advancement of the Scout Movement in the country as well as in the community,” the President said.

He also encouraged the participants to follow all series of the event in order to gain new knowledge, to broaden their understanding, and to enhance their insight so they can contribute to the sustainable development of the country.

President Jokowi concluded his remarks by sending off the contingent to the 24th World Scout Jamboree in West Virginia, the United States. (FID / RAH / ES)