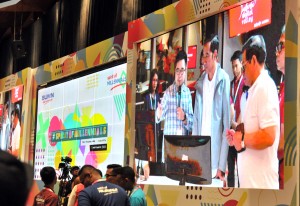 President Joko Jokowi Widodo was happy knowing that three Indonesian State-Owned Enterprises (SOEs) are among 500 best companies in the world. The President expressed his hope that other SOEs can reach similar achievement. I will not announce the companies so they wont become superior because changes can happen in an instant and we must quickly adapt to them, said President Jokowi in his remarks at the opening of the Telkom Hub, in Gatot Subroto, Jakarta, Thursday (1/11).

President Jokowi reminded that our world is filled with innovations.The rule that applies is no longer the strong defeats the weak or the giant defeats the dwarf, because small companies can grow into a big one, and weak companies can be stronger.

The rule applies today is the fastest defeats the slowest, said President Jokowi while reminding SOEs to be cautious, because if they are slow time will tell.

According to the President, changes happen rapidly. Therefore, he urged the SOEs to quickly response and adapt to every change.

Its no longer asset heavy, but asset light. I think all SOEs officials already know this. You cant brag on the assets you have because today the most important thing is brand value, said President Jokowi.

There are only two options: to create innovations or to be left behind. Innovate or left behind, thats all. Because changes are rapid, and soon it will be faster, he said.

The President also reminded that this is not the time to just sit around and feel comfortable. Changes will grind companies that are not cautious in responding to these changes.

Once again, I want all SOEs to move, respond, and adapt rapidly.Now is the time for them to be more flexible. Decisions need to be made quickly as well as accurately and they must grab the opportunities, President Jokowi further said.

Earlier in his remarks, President Jokowi stated that major companies in the world change so quick. 11 years ago, 10 major companies based on their market capitalization value, were: from oil and gas sector: ExxonMobil, Royal Dutch Shell, and Petrochina; from financial sector: ICBC, Citigroup, and Bank of America; from manufacture sector: the General Electric; from telecommunications sector: AT&T and China Mobile; and from technology sector: Microsoft.

In 2017, the composition had changed. Now, 10 major companies based on their market capitalization value are: from technology sector:  Apple, Alphabet, Microsoft, Facebook and Tencen; from e-commerce sector: Amazon  and Alibaba; from financial sector: Berkshire Hathaway; from pharmaceutical sector: Johnson & Johnson; and from oil and gas sector: ExxonMobil.