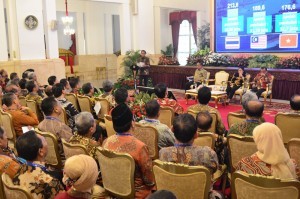 President Jokowi delivers his directives to a number of high-ranking officials of State Universities and Ministry of Research, Technology and Higher Education at the State Palace, Jakarta, Wednesday (10/10). (Photo: Deny S/PR)

President Joko Jokowi Widodo asked officials from Ministry of Research, Technology and Higher Education as well as  State Universities to respond to the fact that only 3 universities in Indonesia listed in the world top 500 universities.

You are more familiar with the real problems , either  management process or other issues, said President Jokowi in a meeting with Heads of State Universities, echelon I and echelon II officials, as well as Head of Higher Education Services Office  of Ministry of Research, Technology and Higher Education, at the State Palace, Jakarta, Wednesday (10/10).

Nowadays, President Jokowi continued, the most important thing is quick respond to the rapidly changing world.

Other countries are now much aware of that, the President added.

If we are still reluctant to leave our comfort zone and respond slowly to any changes we will be left behind, he reminded.

And if we are not ready (to face changes), we may lose the competition, said the President.

Thus, President Jokowi specifically requested that the faculty and study program research development need to be more responsive to these challenges and opportunities. He also said he was quite surprised to find out that the faculties and programs have not changed much in the past decades.

Some of the worlds major universities, said the President, are very responsive to these new challenges and opportunities to provide more value for the community. For example, the President added, MIT has Department of Brain and Cognitive Science; while Kent State University has Hospitality and Tourism Management; and University of Southern California has Interactive Media and Games Program.

However, our faculties and programs have not changed since 30-40 years ago,” said President Jokowi.

Therefore, President Jokowi urged echelon I and echelon II officials at the Ministry of Research, Technology and Higher Education to initiate major changes, starting from simplifying the regulations particularly regulations on establishment of new faculties/ programs.

The President admitted he wanted to make everyone aware that there is a bad ecosystem that has to be dismantled to stimulate a new ecosystem to grow.  Therefore, universities must be able to quickly respond to these changes.

I believe you can materialize this mission, President Jokowi concluded.