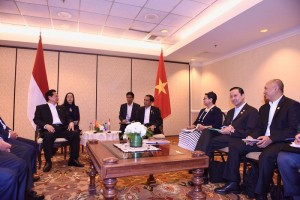 President Jokowi met the Prime Minister of Vietnam in California, the United States (15/2)

After a meeting with Laos, the President of Indonesia had a bilateral meeting with Vietnam, held on Monday (15/2) afternoon, in Miramonte Resort, Indian Wells.

On that opportunity, President Jokowi was delighted to meet the Prime Minister of Vietnam Nguyen Tan Dung.

The first is trade and investment cooperations, as well as my plan to visit Vietnam, President Jokowi said. Meanwhile, the third issue is maritime border and ASEAN.

According to Minister of Foreign Affairs Retno Marsudi, there is an unfinished problem on maritime border with Vietnam, i.e. the Exclusive Economic Zone (ZEE) border.

We have been already conducted seven negotiations and our last consultation was done in December 2015, the Minister said.

As we all are aware, the settlement of border issue is one of Indonesia’s foreign policy priorities. Therefore, the Government is trying to settle all boundaries issues.

Indonesian Government has an unfinished problem on ZEE border with Vietnam and President Jokowi has already instructed to solve it.

Therefore, in the meeting, President Jokowi and Prime Minister Nguyen Tan Dung have agreed to carry out some measures to accelerate the settlement of maritime border issue, in this case is ZEE issue with Vietnam, the Minister concluded.