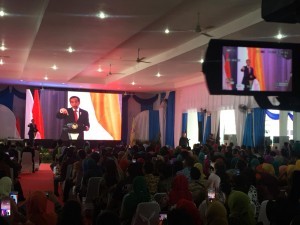 Village Fund that the Government has disbursed in the past four years is not only for infrastructure development, but is also for human resources development, according to President Joko Jokowi Widodo.

“In the past three years, we have focused on building infrastructures, but in the future it is also important for us to develop human resources, prepare for the future of our childrens, provide health services, carry out economic development, including developing Village-owned Enterprises (Bumdes),” the President said at a Coordination Meeting on Control of the Development and Empowerment of Village Community in Deli Serdang Regency, North Sumatra, Monday (8/10).

“Its a substantial amount of money. The total as of now has reached Rp187 trillion Please be careful in managing the fund. There is an additional amount of Rp73 trillion next year,” the President said.

President Jokowi also maintained that that the use of such funds must meet the target; thus, village assistants, who help manage the funds, play an important role. He added the funds must bring benefits for the village community.

The President cited an example that in build irrigation systems and roads, construction materials such as stones and sand must be purchased from the village, or the local residents may be empowered to collect stones from the river, so the money will be circulated in the village. Thus, the President continued, it is expected to reduce poverty in villages and narrow down inequality between villages and cities. Most importantly, he added, it can provide job opportunities for village residents.

Accompanying the President on the occasion were Coordinating Minister for Human Development and Culture, Minister of Villages and the Development of Disadvantaged Regions Eko Putro Sandjojo, Cabinet Secretary Pramono Anung, Deli Serdang Regent, and other participants.