President Jokowi: Village Funds Have to Drive the Village Economy 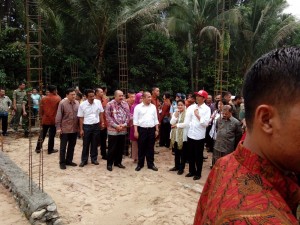 President Joko Widodo (Jokowi) and First Lady Iriana as well as his entourage arrived in Padang, West Sumatra, Thursday (8/10) afternoon. After a rest in the VIP room Minangkabau International Airport, the President and his entourage review, the realization of the use of funds Nagari village in Parit Malintang, Enam Lingkung, Padang Pariaman Regency.

“This the way that we are standing, financed from the village fund Rp. 45 million, worked for 21 days, every day 50 people are involved here, and has been completed,” President Jokowi said.

According to the President Jokowi, most of the village fund has entered into the district, but not yet entered the village. “That which we are encouraged to use the village fund can really drive the people’s economy in the village, and also could increase in the purchasing power of households in the community,” he said.

Construction of the road is quite good because it uses the sand and stones were purchased from the region itself and used for road pavement in the area itself. “This means that the flow of funds continues to occur in the area, so as not to get into the city anymore,” the President added.

Accompanying President Jokowi in this visit, among others, Minister of Health Nila Moeloek, Minister of Rural and PDT Marwan Fajar and Chief of Staff of the President Teten Masduki. (TKP/ES)/Sy.