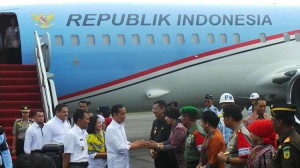 Head of the National Intelligence Agency (BIN) Marciano Norman, after meeting with President Jokowi in the Presidential office Jakarta on Tuesday (4/11), mentioned that the three provinces which President Jokowi will visit on 5-7 November 2014 are South Sulawesi, West Sulawesi, and Southeast Sulawesi.

Head of the National Intelligence Agency (BIN) Marciano Norman acknowledged that his presence in the Presidential office was meant to report the general situation, the condition, and the security situation in the provinces and the countries which President Jokowi will visit.

I ensure that the security situation in those provinces and those countries is relatively good, Marciano said.

According to Marciano, in their meeting, President Jokowi also asked about the possibility of meeting with Indonesian citizens who live in PRC, Myanmar, and Australia.

President wants to meet directly with his people who live abroad. In this way, they can hear directly about the Governments programs, Marciano said and then mentioned that the situation is conducive enough for President Jokowi to meet Indonesian citizens who live abroad. (WID/ES)