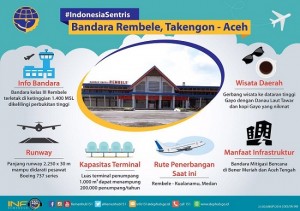 On Wednesday (2/3) morning, President Joko Jokowi Widodo continued his working visit to Sumatra that planned for three days and headed from Kualanamu Airport, Medan on a CN-295 aircraft to Bener Meriah Regency, Aceh, to inaugurate the expansion of Rembele Airport.

For the record, Rembele Airport is located at Gampong Bale Atu, Bukit Subdistrict, Bener Meriah Regency, Aceh Province. The Airport that is located at 1,200 m above sea level is the air entrance to Gayo highlands which has many tourist potentials such as Lake Laut Tawar, Puteri Pukes Cave, Pantan Terong, and Loyang Koro Cave that has hundred years old cultural heritage objects inside. It takes 6 hours to travel from Banda Aceh and 8 hours from Medan to reach this area by road.

The expansion of Rembele Airport was carried out by the Ministry of Transportation in 2014 and 2015, as the implementation of the Ministrys focus to improve the capacity of transportation facilities and services quality to the public. Moreover, it is also a manifestation of the Presidents Nawacita (nine programs) to serve the people in remote and underdeveloped areas.

The improvement of the Airports facilities includes an extension of its runway from the previous size 30 x 1,400 meters to 30 x 2,250 meters and expansion of its apron from 80 x 106 meters to 95 x 150 meters. The runway and taxiway are also coated.

The expansion is also expected to be able to accommodate big aircraft such as the Boeing 737-series. Previously, the Airport could only accomodate small aircrafts, for example Fokker 50 or CN 235. (Humas Kemenhub/UN/EN) (RAS/MMB/YM/Naster)