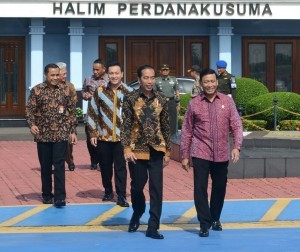 Head of Bureau for the Press, Media, and Information Affairs, Presidential Secretariat, Bey Machmudin, in his press conference on Tuesday (15/11) morning mentioned that President Jokowi will have a silaturahmi (connection building) and give directives to the officers at Mako Paskhas located at Sulaiman Airbase, Bandung.

Meanwhile, President Jokowi, in Secapa TNI AD, is scheduled to give directives in a roll calls of the Commanders of Military Resort and Military District Commands all over Indonesia, Bey stated.

The President and entourage is scheduled to return to Jakarta on Tuesday afternoon.