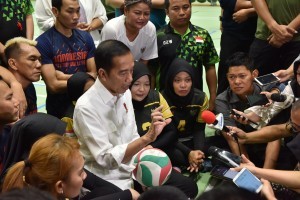 Upon his arrival at 8:50 a.m. Western Indonesian Time, President Jokowi headed to GBK shooting arena where he inspected the venue preparation and watched shooting athletes training.

On the occasion, President Jokowi said that the preparation for the 2018 Asian Para Games, to be held in Jakarta and Bogor on 6-13 October 2018, runs smoothly.

“We have made a lot of preparation and we will be ready soon. I just want to check the preparation, the President told journalists after his visit.

I have instructed Minister of Youth and Sports to make transition from INASGOC to INAPGOC so that the banners and posters of Asian Games will be changed to Asian Para Games,” the President said.

The President further said that there will be a surprise at the opening of the Asian Para Games, but he did not explain the detail to keep the element of surprise.