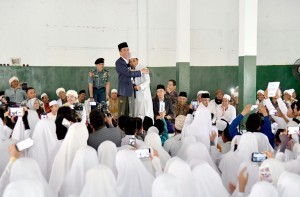 This visit is a form of respect and a return visit for the the presence of Hajjah Siti Raihanun who has visited Presidential Palace Jakarta several times. The last one was on 9 November, when the late Maulana Syaikh Tuan Guru Kyai Haji Zainuddin Abdul Majid was given the title of national hero.

In his visit, President Jokowi tells the students as well as the people to maintain and strengthen the brotherhood of Indonesian people. Maintaining the unity is a form of gratitude for the grace of God for Indonesia which has 700 tribes, 1,100 local languages, and 258 million population.

Prior to the political year, the President reminds the people to hold back and avoid conflict due to different options. People are free to choose but they should not forget to maintain their Islamic brotherhood (ukhuwah Islamiyah).

When he arrives at the school, the Presiden is welcomed by the Head of the Foundation of Islamic Boarding School Syaikh Zainuddin Anjani, Hajjah Sitti Raihanun Zainuddin, the Secretary of the Foundation, and K.H. Lalu Gede Muhammad Zainuddin Atsani, as well as hundreds of students.