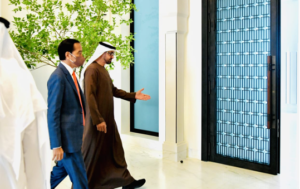 “We should be proud and praise Crown Prince Sheikh Mohammed bin Zayed (MBZ) for that [the street name] because it is a recognition and an honor for Indonesia since not many streets here are named after foreigners. There are only two or three names, like Saudi King and former French President. We should be proud of that,” Indonesian Ambassador to the UAE Husin Bagis said.

The street renaming was a direct initiative of Crown Prince of the Emirate of Abu Dhabi Sheikh Mohammed bin Zayed Al Nahyan, who also serves as Deputy Supreme Commander of the UAE Armed Forces.

For the record, President Joko Widodo Street was inaugurated by Abu Dhabi Executive Office Chairman Sheikh Khaled bin Mohamed bin Zayed Al Nahyan on 19 October 2020. The 2.5-kilometer-long road is located on the main road, near the Abu Dhabi National Exhibition Center (ADNEC) and the foreign embassy district, such as Embassy of the United States of America, Embassy of Turkey, Embassy of Saudi Arabia, and others.

In the meantime, the Indonesian Government has also renamed the Jakarta-Cikampek II elevated toll road after Crown Prince Sheikh Mohammed bin Zayed. The toll road renaming was inaugurated by Minister of State Secretary Pratikno on 12 April 2021.

The change of street names initiated by the two leaders reflects a harmonious relation between Indonesia and the United Arab Emirates in recent years. Relations between the two countries have been built for more than 45 years since 1976.

“I think regarding the relations, InsyaAllah, Indonesia has the most intimate relations with the UAE among others,” Husin said.

In addition, a close friendship between President Jokowi and Crown Prince Sheikh Mohammed bin Zayed is demonstrated by their frequent communication through phone calls. The two leaders also visit each other frequently.

Mohammed Bin Zayed has been to Bogor Presidential Palace, West Java, on 24 July 2019, while President Jokowi has been to Abu Dhabi and met with the Crown Prince on 12 January 2020.

“The closeness between the two leaders can be demonstrated not only by the existing results but also by frequent phone calls every month or two months, whether it’s a phone call from President Jokowi or His Highness. I will set a plan so that the President can pay a visit every year since it is the habit of the Arabs to receive frequent visits,” he explained.

Not only the street renaming, Crown Prince MBZ has also built a mosque and named it after President Jokowi. The mosque is located on President Joko Widodo Street, which the President also passed through that afternoon.

According to Husin, President Joko Widodo Mosque was originally a small mosque before it was built. In the initial plan, the mosque could accommodate up to 1,000-1,200 worshippers.

“However, the capacity was increased by Sheikh Mohammed Bin Zayed up to 2,500-3,000 people. Thus, the mosque is bigger and more luxurious,” he said, adding that the mosque will be built on a land area of ​​​​approximately 3,766 square meters with funding from the UAE. The construction of the mosque will begin in November 2021 and is targeted for completion in February 2023.

On President Joko Widodo Street, Husin added, the new Embassy of the Republic of Indonesia (KBRI) building is also being constructed with the construction progress already reaching almost 35 percent and is targeted for completion by the end of August 2022.

“After completing the project and filling the building, we will relocate there in October,” he added.

On that occasion, Husin expressed hope that the current friendly relations between Indonesia and the UAE can be utilized and implemented properly by all business players in the country, and the cooperation between the two countries will not only be in the economic field, but also in other fields such as education by providing scholarships, sending imams, and so on.

“If we later send imams, we will also provide scholarships, not only in the economic field. Well, the more kinds of fields the better,” he said. (BPMI of Presidential Secretariat/UN) (RIF/EP)