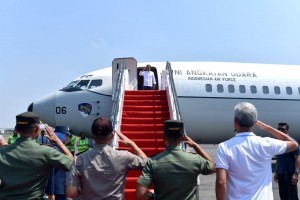 For the record, the earthquake triggered a deadly tsunami that ripped through several parts of the city and the nearby Donggala City on Friday (28/9).

A number of ministers and high-ranking officials including Coordinating Minister for Political, Legal and Security Affairs, Commander of the TNI Commander, Minister of Home Affairs, Minister of Transportation, Minister of Communications and Informatics, Minister of Social Affairs, Head of National Search and Rescue Agency (Basarnas), Head of the BNPB, Deputy Chief of the Indonesian  National Police arrived in Palu, on Saturday (29/9).

Minister of State Secretary Pratikno explained to the Press, Media and Information Bureau of the Ministry of State Secretariat on Saturday (29/9) that the President decided to visit Palu City to find out about the current post-disaster conditions. President Jokowi will instruct measures needed in the wake of the disasters. Our main focus is the evacuation of victims and relief delivery, Pratikno said.

In addition, the difficulty of coordination due to communication breakdown is another factor that prompted the President to immediately inspect the affected areas, he said.

Upon arrival in Palu, President Jokowi and his entourage were scheduled to visit several locations affected by the quake and the tsunami, namely Talise Beach, Balaroa residential complex, and Wira Buana hospital.