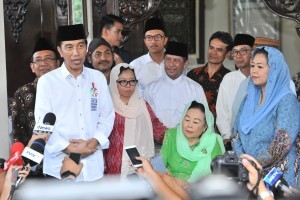 President Jokowi was greeted by Mrs. Nuriyah, her daughter Yenny Wahid, the former Chief of the Protocol Bureau during the administration of President Abdurrahman Wahid Wahyu Muryadi, and several Madurese figures who were present at Gus Durs house.

On the Ocassion, President Jokowi said that he has visited Gus Dur’s house three times before. “If I am not mistaken, this is my fourth visit,” the President told journalists, adding that his visit was to honor 78th birthday of Gus Dur.

The President also said that he is glad knowing Sinta Nuriyah Wahid in good health.

In the meantime, Sinta Nuriyah Wahid said that President Jokowi regularly visits community leaders, and religious leaders. Nuriyah further said that she always prays for the President and wishes him all the best