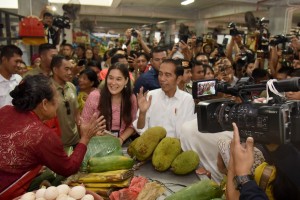 According to the President, Kutuh Village is one of the villages which has successfully used village funds for the welfare of its people by focusing on sports tourism, renting out soccer field for training as well as for international competitions. He also mentioned that the paragliding could produce Rp800 million a year and provide Rp50 billion a year for the village.

“This is how the village fund can trigger the economy in the area so that the people really benefit from it,” the President said, adding that Kutuh Village is a success model in village fund management. He encouraged other villages to do the same.

The President applauded the steps taken by Denpasar Government to start replacing plastic bags with eco-friendly bags. He also praised the planning of the river and park.

“The river planning and greening process are good. I have ordered Minister of Public Works to purify the water.  It is not dirty, but it (still) needs to be purified,” he said.

President also said that there were no complaints from sellers regarding market price and that the inflation took no effect on the price. (FID/OJI/ES)