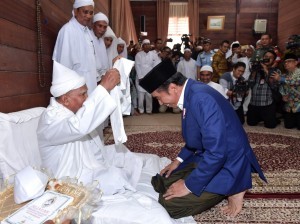 The President said that the visit is a reciprocal visit after Syekh Hasyim visited the President in Solo.

“He visited me when I was a mayor of Solo. This is a reciprocal visit,” President Jokowi told the journalists after the meeting, adding that they discussed several national issues in the one-hour meeting.

“He (Syekh Hasyim) said that Indonesia as a big country should be managed with hard work and that the people’s trust should always be maintained,” the President said.

On that occasion, Syekh Hasyim draped a white turban over the President.

Also present during the event were Minister of State Secretary Pratikno, Special Staff to the President Ari Dwipayana and Governor of North Sumatra Edy Rahmayadi. (BPMI/EN)