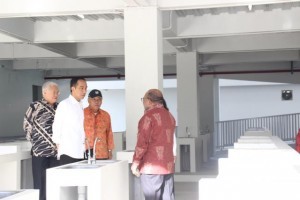 President Jokowi during his working visit to Papua. (Photo by: Public Relations/Anggun).

On the second day of his working visit to Papua, President Joko Jokowi Widodo on Wednesday (10/5) is scheduled to leave for Wamena, Jayawijaya, to visit Trans Papua road project site.

Tomorrow, we will see the project of road construction connecting Wamena with Kenyam, the President said during the inauguration of Skouw Border Post in Muara Tami District, Jayapura, Papua, Tuesday (9/5).

The President added that the terrain in Papua is very difficult so the roads are being constructed not only by Ministry of Public Works and Public Housing but are also in collaboration with the Indonesian National Defense Forces (TNI). With that cooperation, it is expected that the project will be done faster.

The distance from Wamena to Kenyam is 200 kilometers in total. Due to the difficult terrain, the TNI cleared the area to build the road, the President said.

President Jokowi also hopes the road can be operated in 2018. I hope that everything related to infrastructure projects can be begun. The Minister (of Public Works and Public Housing) said that it is targeted to be completed in 2019 but I said it should be in 2018. But I think the Minister has to talk with the TNI Commander first and the Governor before beginning the project. And it has to be finished, the President concluded.