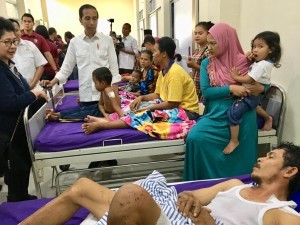 During his working visit in Lampung Province on Wednesday (2/1), President Joko Jokowi Widodo visited patients affected by the Sunda Strait tsunami who were being treated at the dr. H. Bob Bazar Regional General Hospital in Kalianda District, South Lampung Regency.

Arriving at 12:45 a.m. WIB (West Indonesian Time), President Jokowi went straight to the patients room for the tsunami victims. Among the patients, the President met with Sarnama, a mother and her 6-year-old son Yudi. On that occasion, Sarnama told the President how Yudi could survive the tsunami that hit South Lampung on 22 December 2018. According to her, Yudi went missing after the tsunami hit at around 10:00 p.m. WIB and he was discovered the next day at around 08:00 WIB.

Yudi was found while clinging on a wood, Sarnama said. Unfortunately, his two siblings, Ade Purnama (17) and Khalifah (1) were killed.