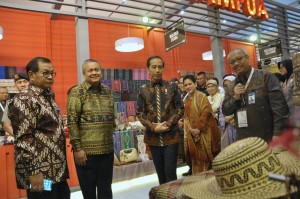 President Joko Jokowi Widodo maintained that he has not received a formal appeal letter for amnesty from Baiq Nuril.

Nuril – a non-tenured female teacher at SMAN 7 Mataram senior high school in West Nusa Tenggara – was sentenced to six months in prison and Rp500 million in fines for recording a lewd phone call between her and her alleged sexual harasser.

Her petition for case review was rejected by the Supreme Court.

I have not received the appeal letter yet. Once I have received it, I will make a decision immediately, President Jokowi told reporters in Central Jakarta, Friday (12/7).

We will make decision after considering several recommendations from related ministries, he added.

Previously, in his working visit to North Sulawesi, President Jokowi said that he allowed Baiq Nuril to apply for amnesty as soon as possible after her petition for case review was rejected.

The President went on to say that he would discuss the matter with Minister of Law and Human Rights, Attorney General, and Coordinating Minister for Political, Legal, and Security Affairs to decide the best approach to solve Baiq Nurils case, whether by granting amnesty or other approaches.

In the meantime, Attorney General Prasetyo has instructed Head of West Nusa Tenggara High Prosecutor’s Office to postpone execution for Nuril following the Supreme Court decision. According to Prasetyo, the Attorney General Office should take into account justice and humanitarian grounds in solving the case. (FID/OJI/ANT/ES)