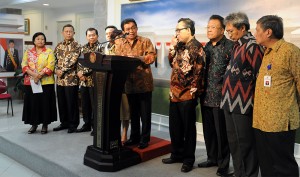 The Board of ISEI submit a press statement after received by President Jokowi, in President office, Jakarta, Tuesday (6/1)

“The President wants that subsidized of fertilizer and seeds removed and diverted. Bulog who regulate the highest retail prices for rice, corn, and soybeans to ensure price and the market for the production of farmers”, General Secretary of the Indonesian Economists Association (ISEI), Dr. Aviliani said, in his statement to the press after meeting with President Jokowi in the office of President, Jakarta, Tuesday (6/1).

According to Aviliani, to be able perform the functions to maintain price stability of daily necessities, the government will strengthen of Bulog. “Bulog, is useful to control food prices and maintain the

Aviliasi suggests, currently, Indonesia has not been able to become a leader in achieving food security in the Asia-Pacific level, as long as it is still dependent on food imports and cannot yet become exporting country.

To the Central Board of ISEI, President Jokowi also expressed his hope to make state enterprises (BUMN) as a driving force of development. In this effort, President Jokowi said that the government has reduced the dividend and increased its investment.

“The President will change the role of BUMN to be larger by increasing the commercial function. Especially in eastern Indonesia, where there is no private interest, then the BUMN will be relied upon,” Aviliani said.

Central Board ISEI when met President Jokowi led by Chief Executive Muliaman D Hadad. The arrival of ISEI, is conveying recommendation the Plenary session in September 2014.