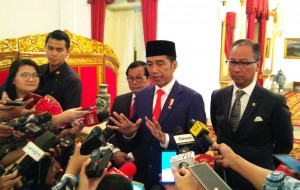 President Jokowi responds to the reporters questions after the Inauguration of Governor and Deputy Governor of West Nusa Tenggara, at the Merdeka Palace, in Jakarta, Wednesday (9/19). (Photo: Jay/Public Relations Division)

President Joko Jokowi Widodo asks the new West Nusa Tenggara (NTB) Governor and Deputy Governor, Zulkieflimansyah and Sitti Rohmi Djalilah who have just been inaugurated at the Merdeka Palace, in Jakarta, to start their works immediately.

There are a lot of problems that should be handled, such as rehabilitation and reconstruction of the quake-affected victims houses, said President Jokowi responding to the reporters questions after the inauguration.

Besides these houses, rehabilitation and reconstruction process must also be executed for public facilities, schools, hospitals, and health centers, that are severely, moderately, or lightly damaged. “This should be their main concern, the President asserted.

Regarding the issues of funding that has not been disbursed. President Jokowi explained that there are procedures to follow. When the process is complete, the funds will be immediately disbursed. (DNA/JAY/ES)(HYP/MMB/Naster)