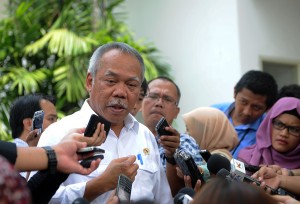 “I was called because the President had the idea to revitalize the slum fishermen settlement areas, in order to be more presentable,” said Basuki told reporters after being accepted by President Jokowi in the President’s office, Jakarta, Monday (22/6).

President Jokowi, Basuki said, commissioned the Ministry of Public Works and Public Housing (PUPR) to select about 10 fishermen slum areas throughout Indonesia to be a pilot project.

“From the 10 fishermen slum areas referred to the President, including in the area of Belawan, Pekalongan and Tegal,” Basuki said.

Minister of PUPR added that President Jokowi has requested that to build the slum fishermen settlement areas to be the city on the waters like the ones in Brunei Darussalam.

“The President asks that the slum fishermen settlement areas could be formed as a city of water, but expected that the cost is not expensive,” Basuki said.

Minister of PUPR has not been able to estimate the investment needs to develop the areas such fishing settlement. (Humas Setkab/ES)