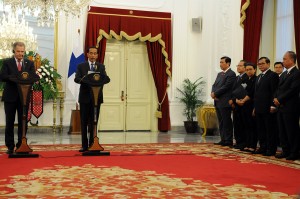 In addition to economic issues concerning trade, investment and renewable energy, the meeting between President Joko Widodo with President Finland Sauli Niinisto Vainamo who arrived at Merdeka Palace, Jakarta, Tuesday (3/11), with the First Lady Jenni Hauk, also discussed on international relations, particularly with regard to the context of the European Union and the dispute resolution problem in some parts of the world.

Minister of Foreign Affairs Retno Marsudi said, in the economic field there are three issues discussed, the first efforts to increase trade and investment. According to the Foreign Minister, the two Presidents agreed to increase bilateral trade to $ 1 billion in 2016, an increase of the trade value if compared until year of  2014 nearly 800 million US dollars.

“So we expect that the target will be reached,” said Retno told reporters at Merdeka Palace, Jakarta, Tuesday (3/11) afternoon.

Secondly, it is still in the field of economics, is an investment. Ministers of Foreign Affairs explained, Indonesia seeks to boost investment cooperation, especially in the field of renewable energy and energy efficiency.

Third, Minister of Foreign Affairs continued, related to the IT (Information Technology) or the digital economy. “As you know we have a vision in 2020 will make Indonesia as the biggest economy digital market in Southeast Asia. So in the economic sector is consist of the field of trade, investment, and innovation,” Retno said.

Regarding cooperation in the context of the European Union, Foreign Ministers Retno Marsudi said that President Jokowi strive for Indonesian citizens could obtain visa-free entry into Finland.

Retno also said that there are other things discussions of peat land management. Minister of Foreign Affairs mentioned, such as the region of Finland is peat land, but the country is already converting the peat land into energy.

“So the energy contribution of peat lands in Finland reached 5-7 percent. It is among other that will be studied by the Minister of Energy and Mineral Resources”, Retno said.  (FID/RAH/ES)/Sy.