President Jokowi: We are all Committed to Defend Pancasila and NKRI 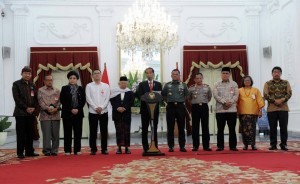 In a joint press conference with the interfaith leaders, President Jokowi said the meeting was held to discuss the dynamics of nationality that become our shared concerns. “I am pleased to hear the commitment of all religious leaders and their people to continue to maintain, defend, and strengthen Pancasila State Ideology and the 1945 Constitution, within the framework of the Unitary State of the Republic of Indonesia (NKRI) and Bhinneka Tunggal Ika or Unity in Diversity,” said President Jokowi.

President Jokowi asserted that freedom of opinion, association, and assembly is guaranteed by our Constitution. However, the freedom must be in accordance with the legal corridor, Pancasila and the 1945 Constitution, and must be within the framework of the NKRI and Unity in Diversity.

Even in the last few days there is a divide between groups in our society, the President asked that from now, the divide be stopped immediately. “Do not blaspheme each other because we are all brothers and sisters,” the President said.

The Head of State also asks that among the elements of the nation do not blame each other because we are all brothers and sisters. “Do not protest each other, we have spent too much energy for the things that are not productive,” the President said, adding that we remain brothers and sisters, no matter what. (FID/JAY/ES) (MUR/YM/Naster).