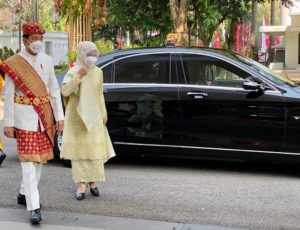 President Jokowi and First Lady Ibu Iriana Joko Widodo shortly before the Commemoration Ceremony of the Proclamation of Independence of the Republic of Indonesia of2021, at the Merdeka Palace, Jakarta, Tuesday (17/08/2021). (Photo by: Presidential Secretariat Press Bureau/Laily Rachev)

President Joko “Jokowi” Widodo on Tuesday (17/8) dressed in traditional attire of the Pepadun people from Lampung Province during Commemoration Ceremony of the 76th Proclamation of Independence of the Republic of Indonesia at the Merdeka Palace, Jakarta.

The President wore a white long-sleeved shirt combined with white trousers and a red tumpal sarong with gold details wrapped around the waist. The President’s ensemble also consisted of a shawl, belt, and ahead covering, all in red color.

At the previous commemoration ceremony, President Jokowi also wore traditional attires from various regions. For instance, on the 74th anniversary of Indonesian Independence Day in 2019, the President chose to wear traditional Klungkung attire from Bali Province.

Meanwhile, on the 75th Anniversary of Indonesian Independence Day in 2020, the President wore traditional attire from South Timor Tengah Regency, East Nusa Tenggara Province. According to the President, Indonesia is rich in culture, including traditional costumes.