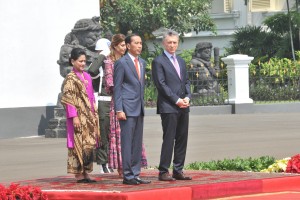 Argentina’s President Mauricio Macri and his entourage arrived at the Bogor Presidential Palace at 11.10 Western Indonesian Time. The convoy of horsemen and troops wearing traditional clothing escorted the arrival of Mauricio Macri from the front yard of the Palace.

President Jokowi who wore a black suit with a red tie greeted Mauricio Macri, accompanied by First Lady Iriana in a graceful fuschia kebaya wrapped in a brown batik shawl.

During the state ceremony, national anthems of both countries were sung as well as a cannon boom. Afterward, both leaders walked through the troops and were greeted by children dressed in traditional costumes.  After filling in the guest book, the two leaders walked to the Palace verandah and talked briefly.

Subsequently, both leaders went to the Left Wing Main Room to hold a bilateral meeting. After the meeting, the two of them were scheduled for a joint press statement. (FID/DNA/JAY/ES)