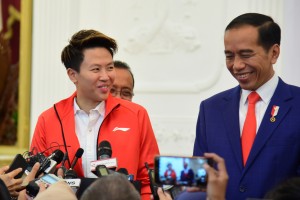 The Indonesian badminton legend has recently announced her retirement from the sport. In response to that, President Joko Jokowi Widodo said that Indonesia would lose a great figure in badminton. Indonesia and the world will very much lose a true champion, President Jokowi said in a press conference held after meeting with the shuttler.

Nevertheless, the President expressed hope that Liliyana will continue to motivate other badminton players across the country
Liliyana has won almost all of badmintons prestigious titles, including the All England, World Championships and the Olympics. Tontowi Ahmads partner in mixed doubles last year announced her plan to retire with the 2019 Indonesian Master (which was concluded last week) as her last match.

Liliyana during the press conference reminded that the next important badminton match will be the 2020 Olympics and she expressed hope that Indonesia can win big at the event. Shortly after the retirement, Liliyana will serve as a civil servant at Ministry of Youth and Sports. Regarding the possibility to be a coach, she said she has not decided it yet. (RSF/OJI/ES)