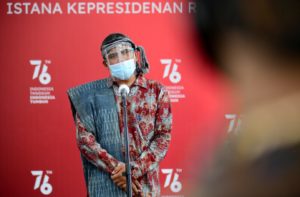 Earlier, Togu Simorangkir and his friends Anita Hutagalung and Irwandi Sirait, staged a peaceful rally nin which they have walked from the Tomb of King Sisingamangaraja XII in Balige sub-district, Toba Samosir regency to the State Palace in Jakarta for 44 days.

This rally, according to Togu, aims to express his opinion about alleged environmental pollution caused by PT Toba Pupl Lestari.

He added that the rally was also a response to the clash between the Natumingka community and the company and to represent a struggle to preserve and save Lake Toba for the next younger generations.

“The President said that the environment that has been damaged must be restored. He said the Government is ready to plant trees, adding that the President is planning to visit the site in November or December this year to plant trees together with the local communities,” he added.

Based on the results of the discussion with the Head of State, Togu also said that the Government will solve problems related to land concession of fifteen customary lands in the area.

Furthermore, Togu said that it is important to preserve and save Lake Toba so that the future generations can still enjoy its beauty, adding that he also expressed hopes that investment in the area around Toba Lake will pay more attention to the environment. (Presidential Secretariat’s Press, Media, and Information Bureau/UN) (AP/EP)