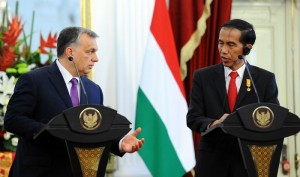 After the ceremony, President Jokowi and Prime Minister Viktor Orban also had a bilateral talk at the Credential Room of the Merdeka Palace.

In his remarks, President Jokowi said:

It is an honor for Indonesia to welcome Your Excellency and almost half of your cabinet to Indonesia. This reflects Hungarys commitment to promote relations with Indonesia, the President said.

For the record, during this visit Prime Minister Viktor Orban brought 50 delegates.

President Jokowi also said that Indonesia is also committed to promoting relations with Hungary and hopes that relations between the two countries could be stronger in the future.

In this bilateral meeting, I would like to focus on the issues of several priority cooperation although weve discussed several issues on our previous meeting, the President said.

Based on the result of the previous talk, President Jokowi and Prime Minister Viktor Orban have agreed on a number of cooperation, including cooperation in water management, city management, agriculture, solar energy, food processing, digital economy, information technology,  renewable energy, trade, investment, and other sectors as well.

Nevertheless, in order to be more specific, in this bilateral talk, we will talk about some of those issues in more details, President Jokowi added.

Weve also discussed cooperation in the information technology sector and agricultural sector. Were going to focus on these two cooperation and from this meeting, we hope that cooperation between the two countries could be further developed, the President said.

After the talk, President Jokowi invited the Hungarian Prime Minister and his delegates to have luncheon at the State Palace after delegates of the two countries signed memorandums of understanding on the fisheries and cultivation sector and the exchange of university students.