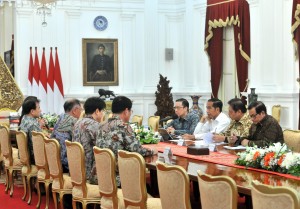 Speaking to reporters after the meeting, Minister of Industry Airlangga Hartarto – who accompanied the President during the meeting – said that President Jokowi and the Hundai delegation discussed the company’s investment plan in Indonesia as well as the future of technology in automotive industry.

Hyundai, the Minister added, is currently conducting a survey to find locations for its factory. The South Korean company is also drafting a fiscal incentive proposal and developing investment plans, he added.

“President Jokowi gave a positive response (to the plan) because automotive industry is one of the mainstays for Indonesia’s exports in the future,” Ailangga said, adding that Hyundai has set sights on allocating 40% of it production in Indonesia for exports and the remaining 60% for domestic market.

Nevertheless, the export destinations, he added, have not been decided yet.