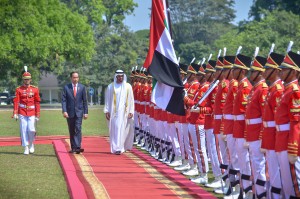 The playing of national anthems of the two countries and the firing of 21 cannons welcomed the two leaders to the palace.

President Jokowi and Sheikh Mohamed also inspected the guard of honor as one of the ceremonial function during a welcome ceremony. Afterwards, the two leaders took a joint photo session, signed a guest book, and a planted damar tree, before proceeding to have a tete-a-tete and bilateral meeting.

During the meetings, President Jokowi and his UAE counterpart discussed Indonesia-United Arab Emirates economic and investment cooperation, which was followed by the signing of cooperation between two countries.

For the record, President Jokowi also welcomed Crown Prince of United Arab Emirates (UAE) Sheikh Mohamed Bin Zayed Al Nahyan at Soekarno-Hatta International Airport on Wednesday (24/7) morning.
Diplomatic relations between the two countries were established in 1976 and trade volume between the two countries stood at more than US$2.18 billion in 2008. Indonesia’s primary exports to the UAE include textiles, garment, paper, plywood, furniture, and electronics, while UAEs exports to Indonesia are among others lubricant oil, chemical products, aluminum ore, iron scraps and corn flour. (DNA/AGG/ES)