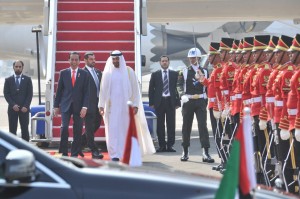 The two leaders are slated to conduct bilateral talks at Bogor Presidential Palace in the afternoon, which will be followed by the signing of cooperation between two countries.

Afterwards, the Crown Prince will head back to Soekarno-Hatta Airport to return to Abu Dhabi.

Based on the UAE Prince Crown Courts site cpc.gov.ae, Sheikh Mohamed bin Zayed Al Nahyan is the Crown Prince of Abu Dhabi and Deputy Commander of the UAE Armed Forces.

Diplomatic relations between the two countries were established in 1976 and trade volume between the two countries stood at more than US$2.18 billion in 2008.
Indonesia’s primary exports to the UAE include textiles, garment, paper, plywood, furniture, and electronics, while UAEs exports to Indonesia are among others lubricant oil, chemical products, aluminum ore, iron scraps and corn flour. (MAY/JAY/ES)