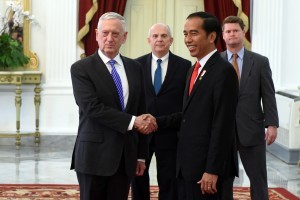 President Joko Jokowi Widodo hopes that the courtesy call made by US Minister of Defense James Mattis can serve as a momentum to realize a strategic partnership between Indonesia and the United States.

I hope that Your Excellencys visit can serve as an important momentum to create Indonesia-US Strategic Partnership in addressing numerous various global and regional problems, the President said when receiving a courtesy call by US Minister of Defense James Mattis at the Merdeka Palace, Jakarta, Tuesday (23/1).

According to President Jokowi, the United States is an important partner in defense technology for Indonesia. Therefore, the President underlined the importance of cooperation between the two countries in the production of defense equipment.

This partnership must be coupled with cooperation on transfer of technology, and if possible, a joint production, the President said.

President Jokowi also hopes that cooperation between Indonesia and the United States in developing regional architecture in the Indo-Pacific region should be aimed at creating a prosperous, stable and peaceful region.

This architecture should be built based on mutual trust, wants to cooperate, openness, and inclusivity, the President said.

Regarding the Palestinian issue, President Jokowi hopes that the two-state solution remains a priority. The status quo of Jerusalem must be maintained and decided in a permanent solution agreed on by the two parties, the President said.

In the meantime US Minister of Defense James Mattis welcomed Indonesias positive effort to promote cooperation between the two countries.

We also fully support the role of Indonesia in the region, he said.

Accompanying the President during the event were Minister of State Secretary Pratikno and Deputy Minister of Foreign Affairs A.M. Fachir. (RAH/ES) (EP/YM/Naster)