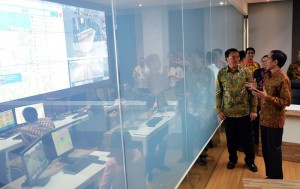 President Joko Jokowi Widodo promised that soon he will give explanation about Jakarta-Bandung high-speed railway which has been discussed lately in detail and openly.

It will be explained in detail from the beginning to the end of the process, as well as explaining the meetings related to the issue, and also the cost, President Jokowi said to the reporters after performing Friday prayer, at the Fatahillah Mosque, in Jakarta City Hall, on Friday (29/1) morning.

According to the President, the materials to be explained openly are currently being prepared. However, the President ensured that there will be nothing to hide in the Jakarta-Bandung high-speed railway project which groundbreaking was conducted at Maswati Tea Plantation, Cikalong Wetan Sub district, West Bandung Regency, West Java, on Thursday (21/1).

The materials are now under preparation, and will be open to public, there will be nothing to hide, President Jokowi said whom accompanied by Cabinet Secretary Pramono Anung and Governor of Jakarta Basuki Tjahaja Purnama.

Previously, Presidential spokesperson Johan Budi SP said that President Jokowi will openly receive the inputs in the implementation of Jakarta-Bandung high-speed railway project which the construction has started some time ago.

After laying the first milestone in the implementation of high-speed railway project, there are inputs from the public, the members of the House of Representatives (DPR), and community groups, which surely be heard by the President.

Johan Budi SP explained that President Jokowi decided to accelerate the implementation of high-speed railway project after receiving inputs from the related ministers. However, during the decision, Johan added, there are several points that become peoples attention, for example, the permits.

According to Johan, the President continues to evaluate the project which has gone through a long process.